You will want to keep this duo of Legend of Thieves oil blend in your home and on your person at all times.  So the story goes, during the bubonic plague, a band thieves used a blend of oils and garlic to protect them while robbing the bodies of people who had succumbed to the infection.  Eventually they were caught and in exchange for their freedom, they gave the king their recipe.  Super dark story BUT if it was good enough for the thieves, it is good enough for me. I bottled this historically accurate, immune supportive blend because it is all I am using now.  In the weeks prior to isolation when we were still having in-person yoga classes, I dispensed drops of it to every student.  I called it the “anti-plague” oil then but legendary blend of thieves sounds so much better.  The room spray is a great alternative if you don’t have a diffuser or want to cleanse the air after your grocery run.  I don’t use the roller on my pulse points (although you could).  I prefer to roll it on clean hands, rub them together and inhale the aroma.  Clove, Cinnamon, Lemon, Rosemary and Eucalyptus come together to create a scent that is warm, spicey, and invigorating.  The spray and roller are sold together ‘cuz I want you to have both. 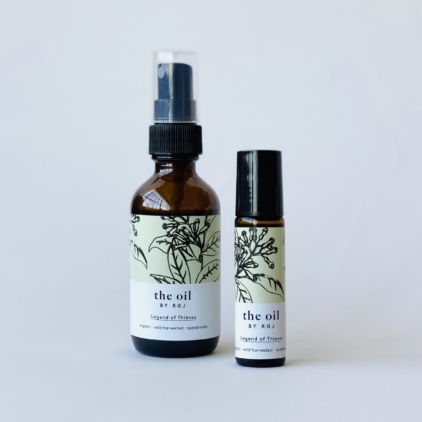 < back to The Oil By RGJ